For some, Peter Borg-Neal is a gladiator – he’s as heroic as Batman, as passionate as a head chef, as solid as a prop forward and as cool as Adam Ant. Bizarre analogies? Quite right. But when I say ‘for some’, I’m mainly talking about the Oakman Inns founder’s Instagram followers, who were treated to these guest personas at the beginning of lockdown, as Borg-Neal (pictured) and his family threw themselves uninhibitedly into fancy-dress to pass the time when we couldn’t leave our homes.

But you know what? I’d say there are a fair few in this industry who would agree with some of those likenesses, for he has become something of a superstar over the past six months, not only representing the hospitality sector in newspapers and on national television, but, vitally, talking a whole lot of sense when presented with those primetime opportunities. A piece that ran in The Sun was the catalyst for the 28-strong group operator being thrust into the spotlight, beautifully illustrating to a national audience how safe and carefully considered a pub set-up can be. From there, it seemed every media outlet wanted a piece of Borg-Neal and his CEO Dermot King, with the duo talking to BBC, ITV, Sky and the like, which eventually led to Borg-Neal speaking on behalf of the industry on the BBC’s Question Time. In that hot seat, he once again spoke fervidly about the on-trade and did a commendable job at calling out some of the government’s most recent “shenanigans”. Why is it, I ask the man of the hour, that people are happy for him to be one of the leading faces of the sector?

“I haven’t got a clue,” he says, chuckling. “I’m still trying to figure out how it all happened. The industry has been short of people advocating for it. Tim Martin does his piece, and although he’s a bright and successful man, he does tend to divide people and is not the ideal person to represent the whole industry. I am not claiming for a minute that I am, but there was a little bit of ‘someone’s got to do it’. It’s harder for the leaders of the large public companies, as they have to be extremely careful about what they say. I can at least say what’s on my mind and be rude to a politician if I want to.”

He says “rude”, but that’s not really the case. For me, it’s Borg-Neal’s directness and honesty that has allowed him to place valid and thought-provoking points in front of politicians on behalf of an industry that’s roaring in desperation behind him. In a typical display of modesty, he is quick to point out how many other sector figures are doing their bit – Simon Emeny of Fuller’s, Jonathan Downey of London Union, Mowgli’s Nisha Katona, Hugh Osmond and Angela Hartnett are a few of the names he checks – but it has felt that Borg-Neal’s actions and comments are noticed and heard by people in high places, not least by his good old mate Matt Hancock. It was in late September that Borg-Neal publicly challenged the secretary of state for health and social care to prove that the recent spike in England’s Covid-19 cases had emanated from pubs and restaurants – something Hancock had claimed on Radio 4. It was another example of Borg-Neal’s ability to turn injustice and anger into industry traction and positive PR.

“Hancock’s answers to the house are terrible,” he says. “He witters away about how some people who have had the virus have been to a hospitality site – in Scotland, 28% of all people who contracted the virus had been to a hospitality site. OK, well let’s follow the data then – that means 72% hadn’t been, so where did they catch it from? We think about one in three of the whole population has been into a [hospitality] site, so why haven’t they caught it? The mathematics clearly work against the government, but they just repeat themselves, because they’re desperate and I don’t think they’ve got the moral fibre to apologise, to say they misspoke and admit what they were trying to do was distract attention from the fact that they were having problems in care homes and hospitals.

“If you look at the top 25 postcodes of the recent outbreaks, 24 are areas of student accommodation. Clearly, there’s the spike. There would have been a spike in July and August if it was caused by hospitality. What they should be doing is using licensing law – if pubs don’t deploy a decent Covid protocol, then close them down for training for three days or whatever. Blanket action is bizarre and the strategy of some despot, tinpot dictator who doesn’t know what he or she is doing.”

Give that man a taller soapbox

You can see what he means when he says he is free to speak his mind. I do want to talk to the Oakman Inns chairman about how the business is doing, but once he is on a roll, it doesn’t feel right to interject and deprive readers of obvious, yet crucial, viewpoints that need to be echoed around the sector. On table service, which Oakman introduced before it was compulsory, he is quite agreeable – pointing out that there has been little-to-no uproar from the on-trade about this particular restriction.

“The reason for that is, even though no one likes it because it is economically damaging, at least we can see the logic behind it,” he says. “But the curfew is mental and it is ruining businesses and increasing the danger to the public. It is deeply irresponsible and I can’t fathom how they thought it was a good idea.”

OK, so there’s a question. Where does he think the government gets its ideas and protocol from? Is it ‘the science’, as we’re so often told? Is it Public Health England? Is it Dominic Cummings?

“I think one of the rationales is focus groups,” he says. “They got the impression that the people believed it was happening in hospitality, therefore if you take action on that you’re seen by the electorate to be doing the right thing. When you think of the impact on jobs and everything else, for a bunch of politicians – who will draw a massive, taxpayer-funded, final salary pension – to risk normal people’s future for small political gain is pretty cynical and I think they’ll be found out. I feel the vast majority of the public agree with us. If customers don’t think we’re a safe place to go, why are we 25% up on last year?”

Aha, there’s my opportunity to pounce on business in general! The fact remains that Borg-Neal isn’t devoting himself to fighting and campaigning for the sector for his own business’ gain. On the morning that this interview took place, Oakman Inns released its latest results, which revealed the highest sales quarter in the group’s history.

The sites within The Oakman Group, comprising Oakman Inns and Ashmore Inns, are mainly based within the London commuter belt. The size and space of the pubs meant that Borg-Neal and King were always relatively confident that the trading conditions brought in back in July would play in their favour. They were right. The large units with big dining areas and decent gardens meant that social distancing was more than manageable, something which featured prominently in The Sun’s article.

“When we reopened in July, we went into slight growth on last year, but then Eat Out to Help Out kicked in and we went into major growth. The key difference is accommodation sales have collapsed, so we’re putting a lot of effort into rebuilding that. Commercial bookings are gone, weddings are gone, big celebrations are gone. Our rooms are 52% down year-on-year, but wet sales are 12.7% up and dry are 45.5% up, so there is a huge change.

“We’re seeing more breakfast and lunch than before – you’d expect that with people working from home in greater numbers. In terms of trends, we’re not seeing anything like healthy choices etc., but we feel there is a continuing trend that people like to order local – meat from a local farmer, for example, always flies out the door.”

While it’s not quite ‘business as usual’, one does get the feeling that life at Oakman is as normal as normal can currently be. The group has worked hard to ensure that safety measures such as screens and signage are all branded like any other Oakman creative – the familiar dark green tones have helped with any potential anxiety that guests may feel upon entering their new-look locals. Trading is positive and so are most of the customers, which has left the business in good shape as it approaches the Christmas period (see box). But does that leave Borg-Neal complacent? Does it heck. True to form, as our conversation comes to an end, he puts the boot into government one last time, conjuring the spirit of his apparent lockdown hero Adam Ant and ordering them to stand and deliver on VAT.

“We need them to turn these tax concessions into something more long-term,” he concludes. “VAT on food at 20% has always been invidious. If I go to M&S and buy a ready-meal that has been produced at a factory, packaged up, shipped to a distribution hub, brought to store, taken home by me, reheated and then eaten – apparently there is no added value in that process. If you come to our pub and I give you pickled egg on a plate, I have to charge you 20% VAT. It has always been mad. It’s a great benefit having had the recent tax burden relief, as we are incredibly overtaxed. I’m very keen to encourage the long-term changes to tax, low VAT rate for eating out and getting rid of business rates altogether. If we don’t have those changes by this time next year, Pub & Bar will have a far fewer number of venues to write about.”

Posted On 02 November 2020 by Tristan O'Hana Back to News 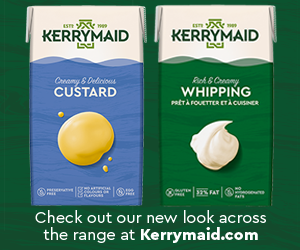